“Cozy mysteries, also referred to as “cozies”, are a subgenre of crime fiction in which sex  and violence are downplayed or treated humorously, and the crime and detection take place in a small, socially intimate community. Cozies thus stand in contrast to hardboiled fiction, which feature violence and sexuality more explicitly and centrally to the plot. The term “cozy” was first coined in the late 20th century when various writers produced work in an attempt to re-create the Golden Age of Detective Fiction.” (Wikipedia).

I am all for limiting explicit sex and violence in mystery stories and have often liked “cozy mystery” series like ‘Murder She Wrote’ or ‘Miss Marple.’ But lately, I am wondering what made me like them with their usual ‘cozy’ premises of small town, and amateur detectives. Isn’t it kind of rediculous to think of murders happening regularly in a small little village or town and to have the local clergyman, landscapers, librarians, as the detective? The exception to this would be the greatest amateur detective, Sherlock Holmes.

Maybe it’s because we imagine ourselves to be amateur sleuths who can solve the crime.

Stream of Consciousness Saturday, #SOCS, is hosted by Linda G Hill. The prompt is  “rhymes with rosy.” Find a word that rhymes with “rosy” or use the word “rosy” and base your post on it. 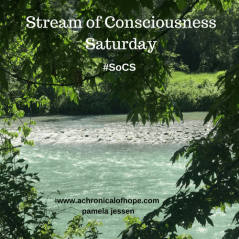 8 thoughts on “Murder So Cozy”