Zenarra stood on the balcony surveying the rocky, desert terrain that surrounded the palace. She has been home for only a month but was restless already.  She missed her little house in The Valley of the Moon. She was called back to Lunaris by an urgent message from her mother begging her to return and fulfill her obligation to marry Prince Tomar, leader of the Dorchas Clan. Their marriage was arranged at birth by the two most powerful clans, the Dorchas and, her clan, the Solas.  Zenarra had hoped to escape this arranged marriage by leaving her home planet and starting a new life on Earth. But she was tracked down by a sensor that had been implanted when she was an infant. When she found out about it she had it removed, but she couldn’t ignore her mother’s plea. Queen Denarras had been her greatest ally when she was growing up among seven brothers and a powerful father, King Samar, head of the Solas Clan. Samar had died, under suspicious circumstances, on a hunting trip last Spring and Zenarra did not want her mother to face the Dorchas Clan alone.

So here she was dressed in her gown before the official engagement dinner that was to happen that evening. She felt so uncomfortable in this formal attire.

You look lovely darling. Zenarra turned to see her mother was standing behind her.

I hate these formal affairs mother and don’t like wearing this heavy gown. All the jewels and weight of this headdress make it hard to walk.

I know dear, I felt the same way the night of my betrothal to your father, Denarras eyes glistened as she gazed at her beautiful daughter and thought, Oh Zenarra you are so much stronger and braver than I was when I married Samar.

Are you ready? Our guests are waiting for us to begin the banquet, Denarras reached out for her daughter’s hand.

I am ready, mother. The two women walked together toward the banquet hall.

As they entered the hall, Zenarra’s eyes scanned the room. All of the important male members of the Dorchas and Solas Clans were seated and she could hear their loud voices and laughter. She noticed that they were laughing and smiling but the glint in their eyes betrayed a deep mistrust. Zenarra saw Tomar seated at the large table at the front of the hall. The bridal table was on a raised platform so all the guests would have a clear view of the couple. Zenarra’s eyes sought out another. Lord Jennar was the leader of her father’s army. She saw him standing in the shadows behind Tomar with the rest of the Solas Honor Guard. Their eyes met and she slowly nodded her head. Jennar leapt forward and grabbed Tomar by the hair. Light gleamed off the sword that quickly ran across Tomar’s throat. The Dorchas Clan leaders rose as one and cried out in rage. The Solas Clan was ready with swords drawn to begin the battle. Zenarra rushed her mother to a safe hiding place behind a wall in her bed chamber.

What are you doing, Zenarra? You will bring destruction down upon this house, Denarras’ eyes were wide with fear.

Zenarra threw off her heavy gown and jewels. She had worn her tunic and leggings under her dress. She grabbed her chest plate and hurriedly strapped it on with the help of her loyal servant Manet. She took up her sword and ran toward the battle and her future as head of the Solas Clan and ruler of Lunaris.

If you would like to read some of the back story about Zenarra, here are links to the previous flash fiction stories: 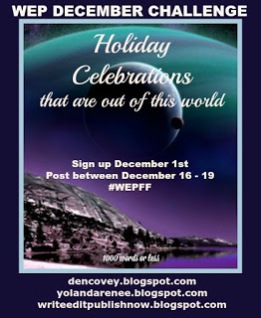 28 thoughts on “Zenarra the Warrior Queen”